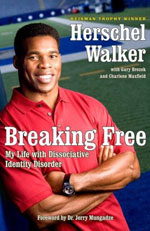 Former Heisman Trophy winner and NFL star Herschel Walker reveals in a new book that he has multiple personalities and once played Russian Roulette.

Walker, 46 and a successful Dallas entrepreneur, said he is still battling dissociative identity disorder (DID) and knows he will open himself up to people making jokes at his expense.

"I know that's coming. Make the jokes, that's all well and good,'' Walker told USA Today. "I'd just like to get it out there that it (DID) isn't a demon. We're not freaks, we're not aliens, we're people. We're people who need a life adjustment."

Walker, one of the most gifted athletes I’ve ever seen, was a fat kid growing up and the target of bullies. “To conquer his social confrontations, Walker says he employed alters that he has given names: Warrior, Sentry, General, Daredevil, Different Drummer, Enforcer.” Walker writes that “my alters functioned as a kind of community supporting me.''

Walker’s ex-wife Cindy Grossman said she did not learn about his condition until after they divorced, but that his DID would explain a lot.

There was also a very sweet, lovable [personality]. That's the one he told me I married. He told me I didn't marry Herschel," said Grossman, who later in the interview recalled a conversation with Walker, "and the next thing I knew, he just kind of raged and he got a gun and put it to my temple."

Walker said he finally sought help when he played Russian Roulette in 1998. "To challenge death like I was doing, you start saying, there's a problem here," he told Nightline.

Vince Dooley, his coach at Georgia when he won the Heisman in 1982, joked to Nightline that he liked “whatever personality Herschel had when he was carrying the football.” Then Dooley turned serious.

"It seems that he's very sincere about saying that he had some of these problems," said Dooley. "He seems to say that people dealing with different issues - he referred to drugs, alcohol, bipolar, whatever it may be - there's a lot of people that might struggle with some problems and I guess with him maybe being outward like that, he feels like maybe he can be helpful to others and he might well be. I think his motives are sincere."