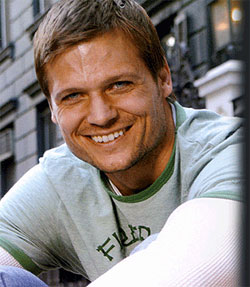 Bailey Chase (right) plays a closeted pro football player who is outed when his lover is murdered on NBC’s “Law & Order: SVU,” which airs Tuesday April 22 at 10 p.m. EDT.

Ken Storer, a writer on the show, told Outsports in an e-mail how he came up with the idea:

I wanted to write an episode for “SVU” that dealt with a gay issue. At the time when i was doing research (last summer), there were a lot of articles in the papers about studies that were coming out saying football players who had concussions had a much greater likelihood of suffering from cognitive problems, brain damage and serious depression.

They were even linking certain players' suicides and deaths to concussion-related brain damage because men in their 30s, 40s and 50s (Justin Strzelczyk, Mike Webster, Terry Long, Andre Waters) had the brains similar to 80-year-old boxers with similar Alzheimer’s-like symptoms and tissue damage. Nobody had ever done an episode about a closeted football player at the peak of his career, so I figured, why not link the two?

I read your website a lot during my research stage, and really liked how you talked about athletes in all different sports, all ages, from all over the country. I'm not what you would consider a jock, but I read it and find it very inspiring.

Alas, neither Cyd nor myself has a cameo where we comfort the player. --Jim Buzinski