Would you sleep with Mr. Irrelevant?

Share All sharing options for: Would you sleep with Mr. Irrelevant? 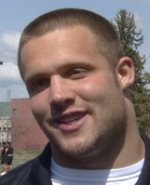 This is probably the last time you'll see the name David Vobora, but he was the 2008 NFL Draft's "Mr. Irrelevant," the nickname given to the last person taken in the draft. The linebacker from the University of Idaho was the 252nd player selected, taken by the St. Louis Rams.

The Dallas Morning News had named Vobora a "sleeper pick" at linebacker in the draft. Apparently, they meant that every team would sleep on him for 251 picks.

He's 6-foot-1, 214 pounds, and as you can see from his Idaho profile page (as compared with the pic here), he's put on a couple pounds since football ended. -Cyd Zeigler jr.