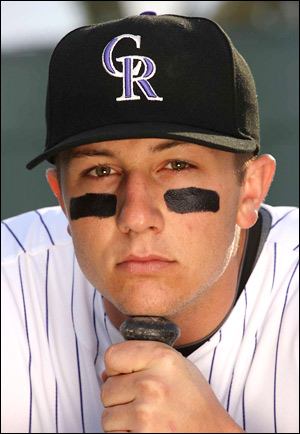 I spent all last year writing a monthly baseball column on here called this month in baseball and now I will be blogging about America's favorite pastime. If you read my column you should expect some of the same, I'll chime in whenever something irks me, whenever something astounds me or whenever a new hottie catches my eye.

The first weeks of a season can be deceiving to a fan. We have spent the past 5 months deciding who will win the divisions without ever seeing a pitch thrown and now the teams are playing and some are struggling, some are far exceeding expectations and others are, apologies to Denny Green "exactly who we thought they were".

As of this post, the Baltimore Orioles, Kansas City Royals and the Florida Marlins are leading their divisions. Three teams that I picked to be either last, or close to it. The Detroit Tigers are 0-7; this is a team with a lineup that most GM's would kill for. The Colorado Rockies, defending National League Champs are 3-5 with a team batting average of .209. This is a team with arguably the best lineup, especially their 2 through 7 hitters, in the national league. Even MVP runner up, Matt Holiday is hitting a meager .267 and that is mostly because of his 2 for 4 game last night. Even the Washington Nationals swept their first series. If the rest of the season pans out this way, we could be in for hell of a season. But I am not counting on it.

By the way, I have to give props to my boy Troy Tulowitzki. Not only did he get the Cover of Sports Illistrated, but he also got the play of the day on Sportscenter on the first day of the Colorado Rockies season. Not to mention the fact that he is one hot man. --Brenton Metzler