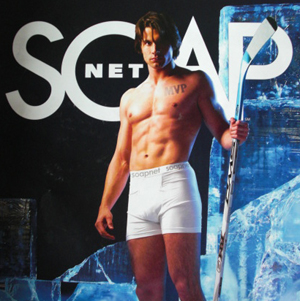 This was the full-page cover ad on the latest issue of Ad Age. It certainly raise a couple eyebrows when people walked into my office and saw the pic of this guy sitting on my desk for the better part of last week. It's an ad for SoapNet's scripted show MVP, a Canadian production about the wives of pro hockey players. The show premieres on SoapNet late night June 19. And reports are that they'll also air the first episode June 20 on ABC after the Emmys; both nets are owned by Disney.

Whether they're targeting gay men or not, with this kind of ad, I have to believe some will check it out. But one thing's for certain: No gay man was involved in the shooting of this picture; otherwise, the waist band wouldn't have been pulled up so high it almost covers his bellybutton.

Either way, the trailer I saw looks horrific; which means it'll be a huge success.