It’s summer time and the living is easy. Especially so this summer in Seattle where the snowcapped mountains reach high into blue skies and cries of “Play Ball!” echo across the championship-caliber softball fields surrounding the “Emerald City”.

The attention of the Gay softball world will be focused on Seattle the week of August 22 -30 as it hosts some 200 teams from 41 different cities for the 2008 Gay Softball World Series.

The 15th largest metropolitan area in the United States, Seattle is home to world class dining, entertainment and recreation that is equal to any city anywhere, but even in the heart of downtown you are never more than a few minutes away from some of the most
majestic natural scenery on the planet.

“Those of us working on the Northwest Quest Series 2008 Host committee are excited that NAGAAA and ASANA picked Seattle to host the series this year” says Frank Pichinini, Executive Director “We are anticipating this to be one of the largest World Series competitions in history and we plan to showcase the best the northwest has to offer.” 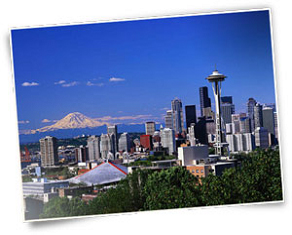 The motto for Series 2008 is "Northwest Quest." It’s meant to stir up the great outdoor spirit of Washington State and reflect the challenge of winning a championship competition.

From the opening ceremonies at the base of the world famous Space Needle through the closing ceremonies at Russell Road Park, the 2008 Series promises to be an action packed, exciting week of activities, both on and off the playing fields.

The Forecast is dry and sunny

One of the great myths about Seattle's weather is that it's always raining. While we can’t promise the bluest skies you’ve ever seen every day, the truth behind the myth is that Seattle has some of the most envied summer weather in the country - and easily some of the best weather for a championship softball tournament.

Whether you’re a player, a fan or just looking for a great place to spend your 2008 World Series vacation we’ve created a Web site to help you plan a memorable trip to Seattle.

So pack your bags, grab your glove and head to the Northwest. We can't wait for you to get here!