The last title won by a Philadelphia pro team

Share All sharing options for: The last title won by a Philadelphia pro team 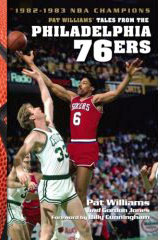 As the NBA Finals continue, it’s a good time to remember the 1982-83 Philadelphia 76ers, the last pro team from the sports-crazy city to win a title (Joe Guckin did a great job chronicling the city’s sports woes the past 25 years). A whole generation of Philly sports fans have grown up without ever having any of their beloved teams (Eagles, 76ers, Phillies or Flyers) win a title.

A new book, “Tales from the Philadelphia 76ers,” provides a remembrance of how things once were. Written by then-76ers general manager Pat Williams and sports columnist Gordon Jones, the book looks at the championship season and the larger-than-life stars who won it. (Point of disclosure: Jones is my brother in law, but the book stands on its own merits). Players on that team included Dr. J (Julius Erving), Moses Malone, Maurice Cheeks and Bobby Jones. The coach was the cantankerous Billy Cunningham, himself a former star player.

The 76ers that season were dominant, winning 65 games in the regular season and going 12-1 in the playoffs, including a 4-0 sweep of the Lakers in the Finals. This was in the era when just a few years earlier, Finals’ games were shown on tape delay at 11:30 p.m. Eastern and before SportsCenter analyzed every basket or utterance. The season was a culmination of years of coming close for the 76ers and folding, including 1976-77 (blowing a 2-0 Finals lead to Portland) and 1981-82 (losing to Boston in the playoffs after being up 3-1).

Using interviews with the key participants, including people in management, the training room, the media and the players and coaches themselves, the book is a breezy, entertaining romp through a special year. The linchpins are Moses Malone, the quiet but dominant center, acquired in September 1982 for the then-princely sum of $2 million a season, and Erving, no longer the ultimate superstar in the league but still a fabulous player. And no one in the league was more loved than Dr. J.

“What stands out to me goes beyond the terrific dunks and the hair that was flying,” retired Milwaukee center Bob Lainer said. “What I always tell people about Julius is that he was so humble for a man of such great distinction. He was the first man to come into a room with kids and the last to leave. He would sign every single autograph for every single kid in the room. That tells me a lot about an athlete, because that’s hard to do.”

“Tales from the Philadelphia 76ers” is a great read for NBA fans and especially those in Philadelphia, who are still waiting to recreate the magic from that era. –Jim Buzinski