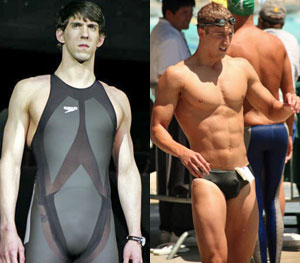 The swimming arms race continues unabated as the national teams from Japan and Germany have decided to use the newest high-tech body suits. Japan will use Speedo’s LZR suit, which was unveiled this winter, while Germany will use one being developed by Adidas. Other companies are also working on their versions of the suits, which use fabrics and a tight shape that reduce the drag in the water.

That the suits work is not in dispute: 38 world records have been set since February by swimmers wearing the LZR (only four by swimmers not wearing the suits). And Japanese swimmers set 16 national records at a recent meet. For the Germans, having the high-tech suits has become a matter of national pride.

Adidas has been developing a new suit after complaints in Germany that the country was headed to an Olympic fiasco against the Speedo suit.

“This gives us courage,” said Helge Meeuw, silver medalist from the Athens Olympics men’s 4x100 meter relay team. “This product is on the same level and may be even better.” …

Many swimmers—some contractually bound to other sportswear companies— argue that the Speedo is unfair and gives athletes added buoyancy in the pool. World governing swimming body FINA says no scientific evidence supports the claims and has refused to ban the LZR Racer.

It sounds to me like FINA is full of crap. How can 38 records in four months not raise concerns, since the only common factor is that athletes were wearing the new suits? How is this NOT performance enhancement and why is this any different than taking a drug to help performance? (I would welcome swimmers to comment on this).

The results are a suit that costs $600 and takes 20 minutes to squeeze into, and a widespread belief among swimmers competing in the Beijing Olympics this summer that they will have to wear one or fail. The director of the American team, Mark Schubert, for example, thinks the LZR improves performance by as much as 2%—a huge leap considering that tenths of a second may mark the difference between first and fourth place.

I have lamented the demise of the traditional racing brief from competitive swimming on aesthetic grounds. However, putting all swimmers in small swimsuits would eliminate any technological edge and allow swimmers to stand on their own talent and skill. Conversely, these new high-tech suits would be OK if all swimmers had access to them, not just those federations rich enough or with sponsorship agreements with the right company. Having a level playing field (or at least one level enough) should be the goal, and races should not be decided in a lab by some fabric chemist. –Jim Buzinski