Share All sharing options for: Cristiano Ronaldo can't keep his shirt on 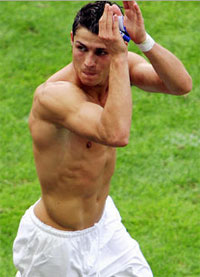 Cristiano Ronaldo can’t keep his jersey on. Not that there’s anything wrong with that.

The soccer stud helped lead Portugal over the Czech Republic on Wednesday, scoring his first goal in eight months and moving on to the quarterfinals of the European Championship. Portugal plays Switzerland on Sunday.

“If we’re carrying on playing like this as a unit, we’ve got great chances,” star winger Cristiano Ronaldo said.

Ronaldo’s first goal for Portugal since October was the winner. It came in the 63rd minute off a brilliant pass by playmaker Deco, who scored Portugal’s first goal. Substitute Ricardo Quaresma clinched it in injury time off a pass from Ronaldo.

It wasn’t long after the final whistle on Wednesday when the 23-year-old Ronaldo stripped off his jersey for post-game celebrations. Photographers seemed to capture every sweaty flex and ripple for the Euro 2008’s Portugal photo gallery.

Besides wowing his gay fans, Ronaldo’s play is also winning over critics. And for a breakdown of Portugal’s 3-1 win, check out this Deadspin analysis. Let’s hope his winning – and shirtless – ways continue on Sunday. --Matt Hennie