Share All sharing options for: Becky Hammon: Traitor or following her dream? 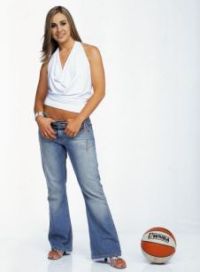 Becky Hammon, who plays for the WNBA's San Antonio Silver Stars, has stirred up controversy with her announcement that she'll play in the Olympics for Russia. Born and raised in the U.S., she also plays professional basketball in Russia and became a Russian citizen to help her basketball career.

Now the U.S. women's basketball coach, Anne Donovan, has called Hammon a "traitor." It's the same Anne Donovan who did not put Hammon on her 'short list' of 23 players whom she's considering for the team (despite Hammon being last season's MVP runner-up). Hammon said she'd do anything to be on the U.S. team; but since they don't want her, she is pursuing option No. 2.

Is she a traitor for playing for another country - and the one that was America's fiercest Olympic rival just 20 years ago? Or is she justified in finding this other opportunity? -Cyd Zeigler jr.