Tiger Woods: From hero to legend

Share All sharing options for: Tiger Woods: From hero to legend 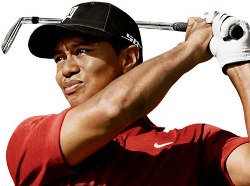 Tiger Woods has been lauded for several years now as possibly the greatest golfer of all time. He's won Athlete of the Year awards. He's No. 2 on the all-time list for Majors titles. But what he did this past weekend brought him from sports hero status to Sports Legend status.

His victory in the U.S. Open was something of Hollywood scripts. He hadn't played in a tournament since early April when he had surgery on his knee. His doctor told him not to try playing in the open. Most commentators I read discounted him, given his knee and two-month leave of absence from golf.

But it wasn't just getting the win while injured or defying doctor's orders. It was the way he won injured. In the most dramatic fashion, he birdied the 72nd hole to force a playoff round, birdied the 90th hole to force sudden death, then settled for par on the 91st hole to beat one of the (by all accounts) friendliest guys to ever play that tournament. That's right, with a bad knee, grimacing from pain throughout the tournament, he went five rounds and an extra hole and beat every other able-bodied soul.

Tiger is hurting now. I give him a 25% chance of playing in the British Open next month, and I give him a 30% chance of not playing golf again this year. But it was worth it. He is now four Major titles away from Jack Nicklaus; and like Nicklaus, he's now a sports legend. -Cyd Zeigler jr.