David Beckham, again in his underwear

Share All sharing options for: David Beckham, again in his underwear 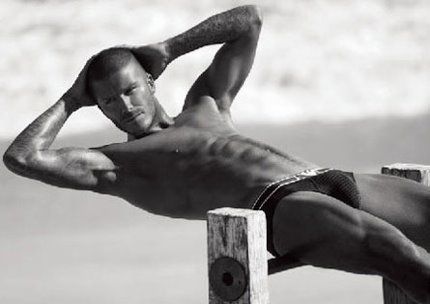 Soccer stud David Beckham likes it big and on top.

His Los Angeles Galaxy of Major League Soccer sits atop the Western Conference, a position Beckham likes, according to his blog. And he towers above adoring fans in a billboard plastered across Macy’s in San Francisco’s Union Square that will soon be coming to cities including New York, Los Angeles and London.

Yes, Becks is stripped down and shilling again for Giorgio Armani. The new ad campaign (photo) was rolled out in San Francisco on Wednesday as Becks sat under a large poster of him shirtless and in his briefs. It’s the second time Becks has pitched for Armani underwear.

While it delighted the hundreds present, there were some rumors that the advertising campaign may have benefited from a touch of airbrushing.

The pictures, which showed Beckham looking less-than bashful while concentrating hard on something in the distance, were met with disapproval from his mother and derision from football pundits, but appear to have been a successful sales ploy.