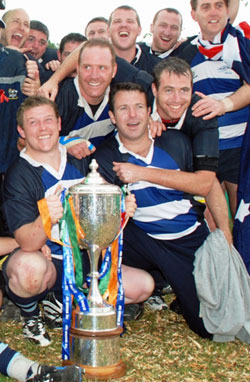 The oddsmakers hit the nail on the head as the favored Sydney Convicts won the Bingham Cup rugby championship with a decisive run through the tournament.

The Convicts beat the Kings Cross Steelers of London, 18-3, in the finale of the event in Dublin, Ireland. They ended the tournament unbeaten at 6-0 and outscored their opponents a combined, 213-18, and did not allow a point in their three pool-play games. Irish bookmaker Paddy Power had made the Convicts the favorites to win the Cup, the most elite of the four titles awarded at the tournament.

"The boys played quick running rugby all week, and went through to the final undefeated," coach Bronnie Mackintosh said. "They trained hard for this tournament and their camaraderie supported them through with a win."

The win was the second straight Bingham Cup title for the Convicts, who also took the 2006 event. The event began in 2002 as a tribute to rugby player Mark Bingham, killed in the Sept. 11, 2001, terrorist attacks in the U.S.

The Gotham Knights RFC, New York City's predominately gay rugby team, earned bragging rights as the top gay rugby team in North America after their finish in the Cup Division. After a semifinal loss to the Convicts, the Knights beat the San Francisco Fog's A-side in a consolation final, placing third overall in the tournament.