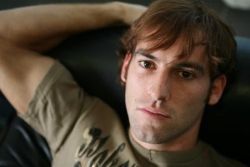 The last American standing at the French Open has fallen.

Robby Ginepri, the hottie who lives in Kennesaw, Ga., dropped his Fourth Round match against Fernando Gonzalez earlier today. Ginepri was the last male U.S. tennis player left in the tournament and the first to make it so far since 2003.

Now there’s more time for the pro jock, ranked No. 88 but likely to move up, to consider the lighter side of life, like why he chose Johnny Depp to play him in the movie about his life. That and other interesting tidbits are included in a Q&A with Ginepri on the French Open site:

The most stupid thing you’ve ever done: Drawing on people’s faces when they’re sleeping. I still do it (laughs).

First kiss: I was 13. Her name was Blair and it was on the school bus (smiles).