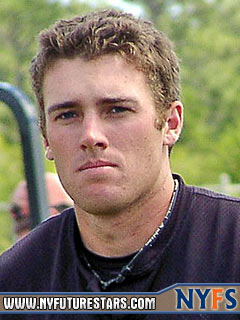 First, my new crush...even though this was against my beloved Colorado Rockies, Nick Evans, recently called up left fielder for the New York Mets, had three doubles in his first Major League game. (video after link)

The Cleveland Indians amazing starting Pitcher, Cliff Lee, a man being talked about as a possible American League MVP, is now 8-1 with a 1.88 ERA, the best ERA in the league.

The Philadelphia Phillies second baseman, Chase Utley, who is getting his own MVP talk in the National League is on track to hit 50 home runs this season. The Major League record for homers in a season by a second basemen is 42, set my Roger Hornsby in 1922 and matched by Davey Johnson in 1973.

Speaking of homers, Cincinnati Reds Ken Griffey Jr. hit his 599th on the same day, putting him one away from the 600 club, a prestigious group of only 5 players in League history.

In a brilliantly gassy PR move, the Minessotta Twins plan to discount certain tickets based on the national average per gallon of the price of gas, updated each week of the season.

The Atlanta Braves have lost 20 straight one-run road games. Not really a stat that the League keeps in their records, but it has to be some sort of record.

The Tampa Bay Rays sold out their stadium for a game against the White Sox. The crowd numbered 36,048 and was only the 11th sellout in the teams 11 year history.

Congrats to Tony La Russa, manager of the St. Louis Cardinals, who managed his 2000th game with the Cardinals, surpassing Red Schoendienst for the most as a manager for the franchise.

Rumors around the league have the Tampa Bay Rays taking a pass on the Vandy hitting sensation Pedro Alvarez for either Buster Posey, a pitcher out of Florida State or Tim Beckam, a shortstop out of Griffin High School. Alvarez is at the top of almost everyone's list as the number one draft pick, so this would be a shocker.

Lou Pinella has a weird new feather in his cap, he has managed three teams, the New York Yankees, Seattle Mariners and now the Chicago Cubs, that have won a game after trailing by 8 or more runs at some point during the game.

The Colorado Rockies, while playing terrible, have somewhat of an excuse. during a two game stretch they played with 6, that's 6, out of their 8 position players hurt, including Runner up to the National League MVP last year left fielder, Matt Holliday, Runner up to the National League rookie of the year shortstop Troy Tulowitzki, Second Baseman Clint Barmes, third baseman Garret Atkins, right fielder Brad Hawpe, and center fielder Willy Taveras. Taveras and Atkins were able to avoid it, but the rest have all been placed, for verious lengths, on the DL. Brenton Metzler