Share All sharing options for: The NHL needs a 'gay' infusion -- actor 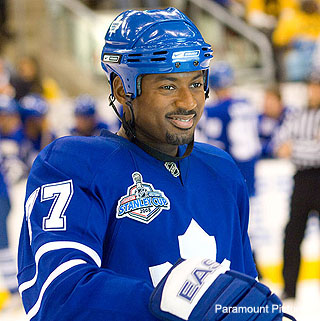 Actor Romany Malco ("40-year-old Virgin," among others) has a way to improve pro hockey's image and visibility -- feature all the hot players. He gave an interview to Puck Daddy on Yahoo Sports.

"I don't know if I'm going to get myself in trouble here, but I'm going to throw it out there anyway. I think hockey needs a new campaign, and ... this is going to sound so gay ... but when people see me in my hockey gear, they go, 'Oh, man, I ain't gonna mess with him.' But that's because they automatically associate hockey with violence," he said, "and there's a lot more sportsmanship and a lot more skill involved than people, especially in this country, think there is.

"If women knew the physiques that were in that locker room. The flexibility of these guys is amazing," he said. "There are a lot of good-looking men. Real, rugged, model-looking type guys. There's a whole bunch of Brad Pitts on the ice. We need a whole campaign of that [stuff], that shows a more human side to hockey. If people got to know the personalities on these hockey teams, not only could you make a couple of reality shows around them, but the people would really take a liking to them."

No joke, but I have been saying this for years. Hockey players are in amazing shape and given the strong European influence there are a ton of hotties (when they aren't growing those hideous playoff beards.) Yet they are covered with bulky uniforms and helmets and are poorly marketed (the NFL does a much better job despite the same uniform issues). Malco should be the new director of NHL marketing and we can help him choose his subjects. --Jim Buzinski