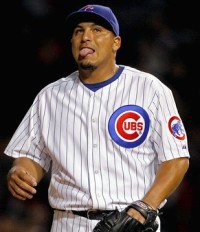 Chicago Cubs pitcher Carlos Zambrano has found himself in some hot water over comments he made that essentially say gay people suck at sports. Via GLAAD's Web site:

“Every time I go to U.S. Cellular, or Comiskey … people start screaming at you and saying all kinds of things, calling you all kind of things. . . . They say something like 'homosexual.' Sometimes I'm in the outfield and they say bad words. 'You're a homosexual.' I say, 'I'm going to show him if I'm a homosexual on the mound.'”

"A homosexual on the mound." An instant classic.

Zambrano also said that he gets bored pitching in American League parks. Hmmmm... I've always wondered what those pitchers did in the bullpen when they're not at bat (or pitching to catchers, of course). Of course, he won't have to worry about that for the next couple weeks, since he's on the DL (and no, that's not the "Down Low").

There is, of course, a Cubs "gay day" coming up, on July 27. Let's hope Zambrano's off the DL by then. Is there any chance Lou Pinella would adjust his starting rotation around a gay day? -Cyd Zeigler jr.