Share All sharing options for: Shawn Chacon likes it rough 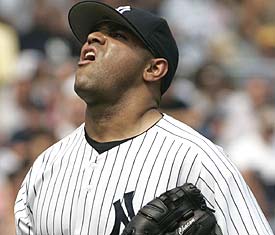 According to the Houston Chronicle, the Houston Astros pitcher, who set a franchise record with 9 non-decisions to start the season was recently demoted to the bullpen, causing him to get...well, a little angry. When GM Ed Wade came to see him before their game against Texas...

Yeah, I am sure that Chacon was exceptionally calm and not raising his voice, cause what happened next backs that theory up completely...

Chacon said that after Wade told him he needed to "look in the mirror," it got worse.

"So at that point I lost my cool and I grabbed him by the neck and threw him to the ground. I jumped on top of him," he said. "Words were exchanged."

He's now been suspended indefinitely and has probably played his last Major League game. What is it with athletes and their anger issues? - Brenton Metzler