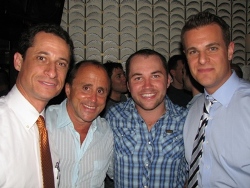 The gay party to be at in Manhattan Thursday night was openly gay former high school football player Corey Johnson. Corey's a good friend of Outsports and helped us win a gold medal in football at the Gay Games in 2006. I tease Corey that he is the true mayor of New York, and you could see why at the party. You know it's the gay party to be at when a straight Congressman (Anthony Weiner, far left in the pic) shows up to celebrate. Also there was friend of Outsports and bigtime gay blogger Andy Towle, former Manhattan Burrough President candidate Brian Ellner (far right in the pic), and gay activist Alan Roskoff (second from left). -Cyd Zeigler jr.

The bf and Sebastian White from JetBlue