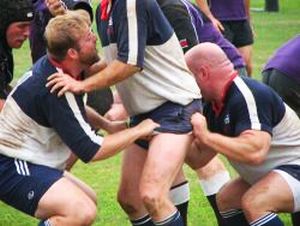 The Irish are famous for betting on anything that breathes, so perhaps this is not a surprise, but it is noteworthy nonetheless: The largest Irish bookmaker has set odds on teams playing in the Bingham Cup gay rugby tournament, which starts June 12 in Dublin, Ireland. I have been closely involved in gay sports for almost 20 years and this is the first time I have ever seen odds set on a gay sporting event.

Paddy Power, where one can bet online from virtually anything from soccer to the NFL to greyhound racing to chess to politics, is an official sponsor of the gay-oriented Bingham Cup, held every two years to honor 9/11 hero and rugby player Mark Bingham.

"It's a real honor to associate ourselves with what is the biggest team sports event to beheld in Ireland this year. It is also the biggest ever sponsorship of an Irish gay-focused event and we are really looking forward to getting behind the lads to ensure that the 2008 Bingham Cup will be the biggest and most successful yet."

Of course, one must resist the double entendre in the "getting behind the lads" line, but what is notable is that Paddy Power has posted odds on the outcome.

Paddy Power have installed Australian side the 'Sydney Convicts' as their 15/8 favorites for victory in the tournament. They have also reported a gamble on English team the 'King's Cross Steelers' which has seen their odds tumble from 8/1 to 4/1 third-favorites.

The odds of top teams:

When I went to the link via the Bingham Cup site to check out the betting, the page was unavailable. Update note: Thanks to a helpful reader, here is the betting link. You can also bet on the other two divisions.

Anyway, put 10 quid down for me on the lads from Kings Cross in London. --Jim Buzinski

Update: Our friends at Deadspin picked up the item and some of their comments are classic ("The over/under has been changed to the top/bottom." "Charles Barkley just put $25,000 down.")

Photo from the 2006 Bingham Cup by Cyd Zeigler Jr. / Outsports