Lesbian fencer speaks out in Beijing

Share All sharing options for: Lesbian fencer speaks out in Beijing 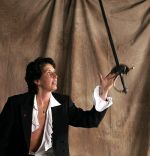 German fencing champion Imke Duplitzer – one of the 10 out athletes in Beijing -- may have missed a gold medal yesterday in women's individual épée, but she should get a diamond-studded platinum medal for speaking out on human rights. Gorgeous gutsy Imke is right in the middle of that firestorm in China, around the PRC's human-rights policy. As far as I know, she is the only one of our 10 who has spoken up.

It's surprising that the American LGBT media haven't paid much attention to this extraordinary story involving one of our own -- though they've had Duplitzer on their lists of who's out in Beijing. Yet Duplitzer's protest activities have been highlighted by a wide variety of mainstream media, from CBS News, USA Today and Time, to New Republic, Earth Times and Spiegel (all of whom neglected to mention that she is a lesbian).

Duplitzer unsheathed her verbal sword before she ever got on the plane, during a lengthy pre-Olympics interview with Epoch Times. The dark-haired fencer made some thoughtful comments on the complexity of issues facing athletes (including herself) who want to follow their consciences, but who also want to have sports careers and the opportunity to compete internationally. She pointed out that athletes boycotting the Beijing Olympics would risk damaging their careers. For herself, the choice was to go to Beijing and make her position known. Duplitzer scored a big touché on the IOC by criticizing what she describes as the Committee's failure to give much guidance or support to athletes on how to handle this delicate issue.

According to a report I found on Yahoo and other sources, Imke also joined eight other German athletes who posed for the cover of a German magazine, Suddeutsche Zeitung, protesting the arrests of Chinese dissidents.

Duplitzer put her own sports career on the line to make these statements. She and some other German Olympic team members have modest professional incomes and don't make millions at their sport, so they were financially strapped and barely able to get themselves to Beijing.

After arriving in Beijing, Duplitzer skipped the opening ceremonies as a protest. Last but not least, she joined with 127 international athletes, including some gold medalists and 40 individuals who are actually competing in Beijing, in signing a respectful but frank open letter to Chinese president Hu Jintao. They asked that the PRC seek peace in Tibet, end the death penalty, and protect human rights in China. The letter was issued by Amnesty International and International Committee for Tibet. The quiet activism by athletes competing in Beijing has been virtually ignored by U.S. network Olympics coverage, who aim to keep American viewers entertained and focused on the "feel good" side of the Games. Unlike speed skater Joey Cheek, who found his visa revoked by China because of his pre-Games protests, the 40 letter-signers have evidently been treated with a more hands-off approach by Chinese authorities -- so far, anyway.

Meanwhile, the Games go on, and competition for women's individual épée just ended. Unfortunately Imke had only one shot for a medal in her specialty. The épée is one of three types of sword used by today's sport fencers (the others being the saber and foil). She narrowly missed the podium, finishing 5th in the overall épée rankings. There's some Beijing footage on YouTube that shows her fencing in the quarter-finals, and losing 15-11 to Hungarian épéeist Ildiko Mincza-Nebald (who went on to bronze).

Beijing did not include women's team épée in its program, so Imke is out of luck for this Olympiad. Ironically, the Chinese have been out of luck in fencing medals too -- at least, so far --though they love martial arts and have been hungry to end European domination of this ancient sport.

A veteran of the German military, Imke is also an Olympics veteran -- of the 1996, 2000, 2004 and 2008 Games. At Athens she took silver in women's team épée, and has an impressive lifetime roster of national, military and world-championship medals. Some time prior to the Athens summer games in 2004, Imke posted the news of her lesbian orientation on her personal website -- which is where I found her when I was researching my 2004 Outsports.com article on the LGBT presence in fencing.