Share All sharing options for: Mike Piazza wants out of South Beach 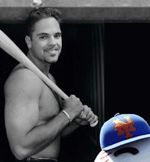 Mike "I'm not gay" Piazza wants out of South Beach. His condo is on the block for $4.9 million, quite a nice uptick for the 3,300-square-foot place he picked up in 2002 for $1.75 million. The three-bedroom unit has terraces and panoramic views and is designed with contemporary styling and limestone floors.

Piazza and his, uh, former centerfold wife have picked up a $10-million, eight-bedroom home in Miami. Piazza married the Playboy Playmate in 2005, three years after his infamous "I'm not gay" press conference and little more than a year after a New York Times article discussed the All-Star's live-in yoga instructor. The live-in, by the way, was a guy. –Matt Hennie