Share All sharing options for: Mitcham fails to qualify for 3-meter diving final 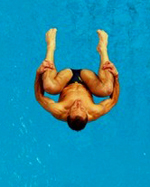 Australian diver Matthew Mitcham, 20, the only publicly gay male Olympian in Beijing, finished 16th out of 18 divers in the 3-meter springboard Tuesday and failed to qualify for the finals (only the top 12 divers reach the finals).

Mitcham was disappointed that he had let nerves get the better of him and would use the experience for a better performance in the 10 meter platform, for which he believed he was in better form.

"I don't know what happened," he said. "Obviously I'm a little bit disappointed. I went out there to do my best an unfortunately I didn't do that but I did try my best so for the 3m competition that will have to be enough for me. But for the 10 meter (platform) that won't cut the mustard for me so I'll just be bringing it for the 10 meter."

Bob Ballard, covering diving for the BBC, wrote this for Outsports about Mitcham's diving on Monday that barely got him into the semis: "Maybe it was me, but I detected an air of nervousness about the Sydney-based Australian. He was all smiles at the start, but that soon turned into an anxious grin and we didn’t get the trademark Mitcham toothpaste smile until after he had completed his last dive and was assured of a place in Tuesday’s semis."

The springboard is not Mitcham's best event; that would be the 10-meter platform, which starts Friday.