A thriller in volleyball quarters

Share All sharing options for: A thriller in volleyball quarters 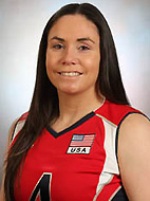 What a thrilling quarterfinal match in women's volleyball between the U.S. and Italy. The Americans were down 2 sets to 1 after losing the third set badly, 25-19, but they stormed back to win the fourth set and crushed the defending World Cup champions in the tiebreaker, 15-6. The star was Lindsey Berg, who substituted in late and sparked the Americans on their come-from-behind run. One question for volleyballers: Why are the first four sets played to 25 points, but the crucial fifth set is played to only 15? Seems odd to me.