My day with the Giants

Share All sharing options for: My day with the Giants 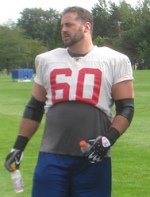 My football team headed to New York Giants camp in Albany last Saturday for a little team retreat. Pat Hanlon of the Giants has been incredibly good to me for years and he set us up with VIP passes; he’s very gay-friendly and has helped set a gay-friendly tone with the Giants.

I took a lot away from watching the defending Super Bowl champions practice (that's lineman Shaun O'Hara to the right). It was all business. There was a set schedule and coach Tom Coughlin held them to the schedule to the minute. There was intensity and fire out there; it seemed no one, except maybe Plaxico Burress who simply stood on the sidelines and watched, was taking last year’s playoff success for granted. It was cool to see.

I also go to see my ultimate NFL lust object, David Carr. The field manager told us that right now Carr is likely to make the team as the third QB, behind Eli Manning and Anthony Wright. Another reason to like the Giants.

By the way, what you’ve heard about Brandon Jacobs being an absolute beast: True, true true! When he took his first handoff, it looked like a defensive lineman had just been handed the ball. You can’t believe he’s a running back. 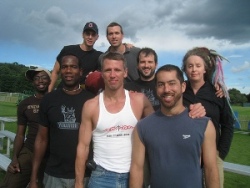 It wasn’t a surprise to see the Giants go out Monday night and really dominate the Cleveland Browns with their intensity and fire. I had been thinking the Giants would be lucky to get to 9-7, and they’d likely be .500. Now, I don’t know. Another run at the Super Bowl? I just think that’s unlikely. But with the Cowboys at Club Med in Oxnard for a few weeks, I can see the Giants winning that division; and then, who knows! -Cyd Zeigler jr.