In one of the biggest upsets at the Beijing Olympics, out diver Matthew Mitcham won a gold medal in the 10m platform. The Chinese were heavily favored in the event, and Mitcham was behind Zhou Luxin by about 35 points going into the final dive. But Mitcham hit an unbelievable score of 112.10 on his sixth and final dive to win by just over three points.

"It's absolutely surreal. I never thought that this would be possible,'' Mitcham said. 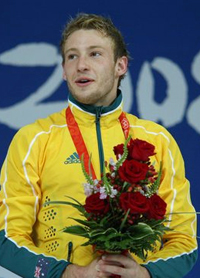 "I wasn't even sure of my medal chances at all. After I did my last dive and I saw I was in first, I thought, "That's it, it's a silver medal, I am so happy with this' and then I won. I can't believe it, I'm so happy."

The win capped an amazing journey for Mitcham, who had quit diving two years ago battling depression and burnout.

Mitcham's win denied China a sweep of the the men's and women's diving gold medals. On his final dive, Mitcham to decided to go for broke, attempting a routine with a high degree of difficulty -- a back 2 1/2 somersault with 2 1/2 twists. He nailed it and scored a stunning 112.10 points, getting perfect 10s from four of the seven judges.

The door to the gold was left open when the previous diver and leader, China's Zhou Luxin, flubbed his last dive, a reverse 3-1/2 somersault in the tuck position. He got a quite low 74.80 score, which put Mitcham in front by only 4.8 points. How close was it? Zhou's score on his last dive was seven points less than his second-lowest scoring dive of the round.

In the crowd watching his day for ages were members of his family and friends and his partner, Lachlan. Mitcham celebrated, cried and laughed as the results were announced.

Lisa Dillman of the Los Angeles Times described the scene after: "Not only did he quit diving, but he battled depression and then took a big step, coming out in an interview with the Sydney Morning Herald earlier this year. The first thing he did in the mixed zone with print journalists was hug the reporter who handled the story with particular sensitivity."

"Being gay and diving are completely separate parts of my life," he told journalists. "I'm happy with myself the way I am."

"My cheeks hurt from smiling, my face hurts from the chlorine, my legs are sore from jumping up and down," Mitcham said.

Related: Video of Mitcham with his mom and partner Lachlan