Share All sharing options for: Rule #1: Don't Kick The Ref 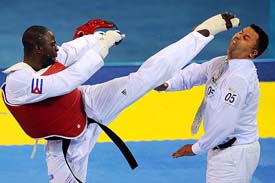 Cuba's Angel Matos earned a special place in Olympic History as "Dumbest Olympic Athlete" today. He was taking time out for an injury and he delayed too long getting ready to fight again. The referee ejected him and Matos decided to strike back. Jim Lampley said in his broadcast, "...Because after all, it's the first rule in Tae Kwon Do: you cannot kick the referee in the head."