Share All sharing options for: What Mitcham's win means to gays everywhere 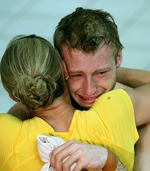 Matthew Mitcham made me cry.

It takes a lot for me to weep while watching sports, but that's how moving his gold-medal diving performance was Saturday in Beijing.

I teared up when he first saw the score from his final five and looked on in disbelief. Then again when a female friend ran up to him backstage at the Water Cube, hugged him and said, "Matthew, you just won the Olympics!" Mitcham looked stunned, and started to sob. The tears flowed later when I watched the medal ceremony and saw someone who had conquered a lot in his 20 years looking like the happiest person on Earth. An openly gay male athlete won an Olympic gold medal. With his boyfriend cheering in the stands. Wow!

By winning the gold medal in the men's 10-meter platform diving, Mitcham struck a golden blow for gay people everywhere who've been told they're flawed or not good enough, especially in the athletic arena. For all the gay men who have been called weak, sissies, pansies, too emotional, not tough enough to compete in sports, that final dive was for you. Mitcham helped to shatter those stereotypes and brought me to tears thinking about what was possible. 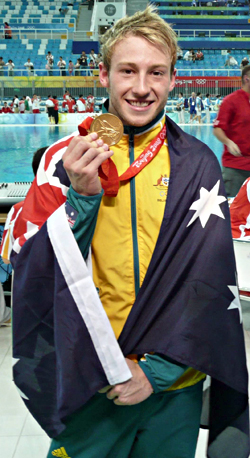 Weak? You try executing incredibly detailed dives from 30 feet up with the whole world watching and a medal on the line. Then nailing a dive that scored higher (112.10 points) than any ever attempted in the Olympics to win the gold medal.

Not tough enough? Mitcham became the first diver, man or woman, to beat the Chinese in Olympic diving this year. And he did it on their home turf by performance flawlessly under pressure like the champion he is. It was the Giants beating the Patriots in the Super Bowl or a golfer beating Tiger Woods with a 50-foot putt to win the Masters.

With his glorious final round of six dives, the 20-year-old Australian became the most significant openly gay male athlete ever (out lesbians such as Martina Navratilova and Ameile Mauresmo have won their fair share of titles). When it comes to sports, the closet is still much deeper for men than women, which is why Mitcham's triumph is so historic.

Watching the diving all week, I would bet my life savings that Mitcham was not the only gay man on the springboard or platform. And Greg Louganis, also gay and winner of multiple gold medals, is considered the greatest diver ever. But only Mitcham was out publicly while competing and contending for a gold medal, not worried about the reaction or scrutiny it would bring. Never before have gay sports fan been able to watch a man they know is gay win such a major sporting event; no need for gaydar with Matthew.

His story resonates because it's universal for millions of people, especially for many who are gay: Struggling with depression, his sexuality and possessing a rebellious streak and a taste for partying for a kid who was not sure he fit in (he might have been the only diver in Beijing to have a pierced tongue). He quit diving in 2006 and came back in 2007 after missing the camaraderie in a place where he was accepted. This is not a spoiled rich kid who had things handed to him. It took a corporate grant from Johnson & Johnson to allow his partner, Lachlan Fletcher, to attend the Games.

Mitcham did not allow his struggles to deter him, but used them as motivation. "I probably wouldn't have as much of a fighting spirit," he told the Sydney Morning Herald when he came out publicly this May. "The more you have experienced, the more you have to draw off. I look at the last 20 years as a long, winding path of lessons and some hardship. I hope the rest of my life isn't straight because that could be boring."

He has understandably said that he does not want to be known as the "gay diver." "Being gay and diving are completely separate parts of my life," he told journalists after winning the gold. "I'm happy with myself the way I am."

Of course, that is the attitude he should take, but he has become a role model for gays everywhere, whether active in sports or not, simply by being the way he is. We celebrate Mitcham for his courage off the platform and his talent on it, and in the immediate aftermath it's impossible to separate the two.

Mitcham's success will not cause a flood of gay athletes to suddenly come out. Every athlete deals with their sexual orientation in his or her own way, and it still is easier to be out in an individual sport than in a team sport with its unique dynamics. Mitcham, though, can act as a symbol that one can be openly gay and yet still scale the heights of their sport.