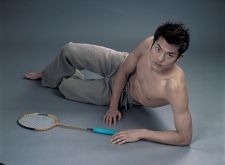 In the U.S., badminton is nothing much more than a game played during a backyard barbecue. But in much of Asia, it's a national passion and the elite players are amazingly skilled, having to handle serves that can top 200 mph.

The favorite in the men's singles is Lin Dan of China, who owns a ton of titles but has yet to win an Olympic gold medal. He's a national star, his girlfriend, Xie Xingfang, is also top-ranked and he would fit right in with American jocks who like to play the bad boy.

Lin's most recent public bust-up was with South Korea's Chinese coach Li Mao in January.
During a defeat to Lee Hyun-il, Lin threw his racket in Li's direction after protesting a line call awarding a match point to Lee. Lin refused to apologise for his outburst, saying Li was insulting him in Chinese.

In April, Lin was forced to deny on his blog newspaper reports that he had punched his coach Ji Xinpeng in training.

Despite his indiscipline, Lin is an officer in the People's Liberation Army (PLA) and signals his victories with a triumphant military salute -- more food to critics who feel he should be more humble. ... "People have different characters and different temperaments," Lin says in his defense.

A badminton player with 'tude? All we need now is for him to start referring to himself in the third person.