American out Olympian in soccer

Share All sharing options for: American out Olympian in soccer 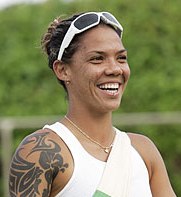 As we've said many times before, there are surely many athletes at the Olympics who are openly gay with friends and family, and may have even told some of the press, but it just hasn't gotten much coverage because they're not a high-profile athlete. While Natasha Kai, who is a forward on the U.S. soccer team, is a great and up-and-coming athlete, a comment of hers in June to an NBCOlympics.com writer didn't get much press. In talking about attending the U.S. Women's National Team training camp in January, she said this:

"It was a hard time," remembered Kai, who saw action limited action under former coach Greg Ryan as one of the last three players added to the 2007 World Cup roster. "I had missed the first camp [under new head coach Pia Sundhage] in early-January because I had bronchitis, and I was going through a nasty break-up with my girlfriend. Then [Coach Sundhage] told me my job was on the line."

Kai played soccer at the University of Hawaii and was Conference Player of the Year three times. She's super popular with lesbians for her beautiful looks, her smile, and her great attitude that comes from growing up in Hawaii.

She is the first American out Olympian we know of in the 2008 Games.

Hat tip to a reader.

There's a great video on Youtube of Kai reflecting on surfing and playing her ukulele in Hawaii and talking about life and making the U.S. team.