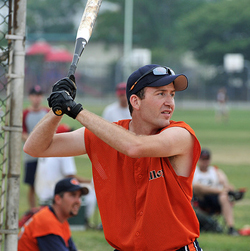 A tragic story out of Boston, passed on to us by Benoit Denizet-Lewis:

I just wanted to let you know that it has been an extraordinarily painful week in Boston's gay sports community. Dave Hildebrandt, a beloved 29-year-old player in the Beantown Softball League (he also played for four years in the gay basketball league -- he was my teammate one year), drowned over the weekend while camping in New Hampshire with members of his softball team. Dave coached college volleyball and was to start as the men's and women's coach at Elms College this fall. David was a wonderful and kind man, and he will be missed.

News articles say that Hildebrandt’s body was recovered on Tuesday downstream from a swollen river that he fell into on Sunday while on an outing with fellow softball players.

Hildebrandt, 29, of Dorchester, had been missing since Sunday after he slipped on some rocks and was pulled under by the currents of the Swift River in Albany, N.H.

The river had been heavily swollen from recent rains, and Hildebrandt is the third person in recent weeks to drown in state rivers, according to officials with New Hampshire Fish and Game. … Albany, N.H., is roughly 50 miles northwest of Portland, Maine.

Elms Athletic Director Louise McCleary, who hired Hildebrandt in May to coach the men's and women's volleyball teams, called it "tragic news."She said Hildebrandt had "a passion for life, a passion for athletics and it was infectious on all of us."

Hildebrandt was hired by Elms College after coaching for seven years the men's and women's teams at Newbury College in Brookline, Mass. In 2006, he won women’s national coach of the year in his division.

A former player wrote this about Hildebrant: “Dave was my volleyball coach for three years at Newbury College before he took the position at Elms. It is so hard to see this to happen to someone I knew very well. Dave was such a great guy. He was so dedicated to our team and the sport. He was always willing to help out me or any of my teammates in whatever we needed. He will truly be missed.”