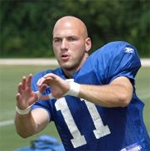 How can you not like a wide receiver with amazing hands, terrific speed and toughness ... and he reads Dostoevsky? That's Indianapolis Colts second-year stud Anthony Gonzalez, who is fast becoming a go-to guy for Peyton Manning. He had nine catches for 137 yards and his heady lateral to Reggie Wayne after a 58-yard catch sparked the Colts to an 18-15 comeback win over the Minnesota Vikings. Said the self-effacing Gonzalez about the lateral: "That probably was one of the dumber things I've ever done, but it worked out."

Elsewhere in Week 2, a horrible officiating call screwed the Chargers at Denver. Check out our take on NFL Week 2.