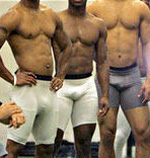 Tampa Bay Buccaneers offensive lineman Jeremy Trueblood said a fight broke out in overtime of Sunday's game against the Chicago Bears after a Bears player grabbed his genitals.

'One thing I don't stand for is someone grabbing you in your genitals,'' Trueblood told the Chicago Sun Times. (Yeah, that's also the one thing I won't stand for; it's much better lying down). The fight that broke out resulted in Bears defender Charles Tillman getting nailed for a key penalty that kept the Bucs' drive alive. They went on to win 27-24. Bears players complained that Trueblood also should have been penalized.

Replays ... showed Trueblood taking a swing at Adewale Ogunleye on the ground with his left arm and using his right arm as a bar across Ogunleye's neck. A big pile ensued, and after Tillman began pulling players off, he engaged with wide receiver Michael Clayton, throwing a punch that earned the flag.

Asked if Trueblood's accusation could be true, Bears defensive tackle Tommie Harris said: ''Probably. I don't know. They grab [testicles], they pinch, they do everything underneath the pile. It's football. It's what goes on during the whistle.''

When asked to clarify if Trueblood actually could be serious, Harris said it was possible. ''Yeah, the same way my junk got grabbed during the game,'' he said. ''That happens, so guard your junk.''

It's common knowledge that all sorts of "interesting" things go on in a pile at an NFL game, with players punching, grabbing and poking at any body part they can reach. It's all part of trying to gain an advantage.

One week we have Chris Cooley showing his penis on his blog, the next we have players talking about guarding their "junk." Is this the NFL or a new reality series sponsored by Manhunt?