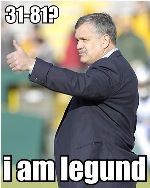 Jay Glazer of FoxSports has reported that Matt Millen has finally lost the negatives of William Ford, Sr. at that donkey show in Tijuana. He's is out as GM of the Detroit Lions and Detroit fans worldwide are breathing a sign of relief. Matt Millen's tenure has been a textbook on how not to run an NFL franchise. He had a three YEAR road losing streak. Draft failure after draft failure: Joey Harrington, Mike Williams, and Charles Rogers. Bad free agent signings like Jon Kitna. The man had an anti-Midas touch. Even Red Wings fans would chant "Fire Millen" when they were bored. Well, it's finally over.

Congratulations Lions fans. It's morning in Detroit once again.