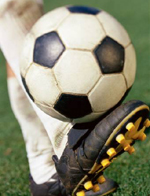 Last week we reported on a Muslim soccer group in France that refuse to play a gay team in their league. Their refusal was based on their "principles." Word comes now that the group has changed its mind and they will play the gay group. The Muslim team's director said their initial refusal wasn't based on homphobia:

We had rejected playing this match not on the grounds of homophobia, as we have been accused of doing, but simply because the name of the club [Paris Foot Gay] did not seem to us to reflect our vision of sport.

Uh-huh. I'm sure the change of heart has nothing to do with the fact that the team was facing expulsion from its league.