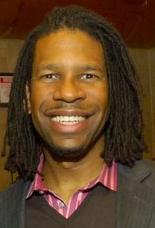 Last week ESPN columnist LZ Granderson (right) shared some insights into his conversations with closeted professional athletes. One athlete in particular got the bulk of his keyboard's attention: A pro athlete who, for the first time in Granderson's career, told LZ that he'll think about coming out. The impetus? The athlete has met someone he's fallen for and wants to be with him. Granderson's advice: Be cautious.

So as I was talking with my new gay acquaintance, I reminded him that, in today's world, there is no such thing as privacy, especially if you are in the public eye, so any little thing you do could fuel rumors. Because of today's technology and social media, what you had for lunch and with whom could be known by millions of people before you even ask for the check.

It's really a shame, but I think Granderson is dead-on. It's the chilling effect our phone cameras and gossip sites have had on gay pro athletes: It's pushed them deeper into the closet. If you were a starting forward for the Miami Heat, would you let yourself be seen at a candlelight dinner with another guy? Twenty years ago, word wouldn't have gone anywhere. Ten years ago, it would have been only rumors. But now, you'll have cameras from TMZ in your face as soon as you step out the door.