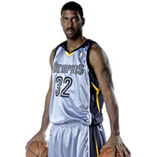 For those who like simple blue-and-white uniforms, shield your eyes now. The Memphis Grizzlies have introduced their third alternate uniform for the 2009-10 season. The new unis are supposed to reflect (and they do reflect) the shine and shimmer of Memphis' famous Beale Street. When I drove across the country last December, we stopped in Memphis, spent an evening on Beale Street. My lasting memory of the place was smoke-filled bars and over-priced drinks. It was also 35 degrees out, so that may have had something to do with the subdued atmosphere.

The whole point of these alternate uniforms is to get fans to shell out $80 for yet another jersey. But what fans are really going to wear these shiny pieces? They look like they belond in the WNBA. Apparently, some of the players had input on the design. Is O.J. Mayo headed to "Celebrity Project Runway?"