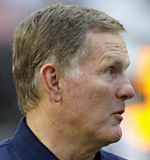 ESPN college football analyst and NFL Hall of Famer Bob Griese has been suspended one week by the network after a remark he made about NASCAR driver Juan Pablo Montoya.

During Saturday's Ohio State-Minnesota game, ESPN ran a NASCAR graphic and co-analyst Chris Spielman wondered where Montoya was, since his name was not in the Top 5 in points standings, causing Griese to say:

I had the game on, heard the comment and immediately knew that Griese was in trouble. He apologized twice during the broadcast and ESPN issued a release disapproving of his comment. Montoya is from Colombia, while tacos are Mexican, but to Griese they all must look and eat alike.

It was a dumb and stereotypical thing for him to utter and a week off sounds right. Broadcasters need to learn that ANY attempted joke with an ethnic bent is just asking for trouble and should resist the urge.