Share All sharing options for: Another lying sack bolts for better college job 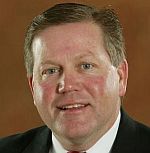 University of Cincinnati football players are pissed that head coach Brian Kelly quit on them and took the job at Notre Dame. Kelly follows in the proud tradition of Nick Saban and Bobby Petrino, liars who swore there was nothing to rumors just days before bolting.

"He went for the money," Cincy WR Mardy Gilyard told the AP last night. "I'm fairly disgusted with the situation that they let it go for that long. I feel like there's a little lying going on there. I felt he'd known this the whole time. Everybody knows Notre Dame's got the money. I kind of had a gut feeling he was going to stay because he told me he was going to be here."

I had an immediate distaste last week when I watched Kelly behave like an ass at a press conference, refusing to answer questions about Notre Dame and blaming the media for the nerve to ask such questions. But there's no way Notre Dame hires a guy unless they had already done some due diligence, which Kelly certainly knew about.

His now-former players are also upset that they were the last to hear that Kelly was leaving, even though he promised them they would be first. He also left them even though they still have one game to play, the Sugar Bowl against Florida.

I hate this about college sports that coaches preach integrity and loyalty and team, then have no problem lying through their teeth if it helps them climb the ladder. Unfortunately, players who came to Cincinnati thinking Kelly would be their coach can't as easily go elsewhere. Kelly will make it much easier to root against Notre Dame to lose each week.