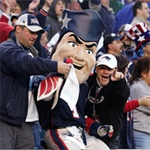 The New England Patriots haven't been playin great, but at least their mascot is getting some play. Robert Sormanti, a 47-year-old mascot for the New England Patriots, allegedly answered a Craigslist ad and attempted to procur sex from a woman in exchange for cash. Guess he won't be on time for any team meetings this week. The Patriots have suspended Sormanti, one of several people who don the Pat Patriot outfit.