Did Heisman get it right?

Share All sharing options for: Did Heisman get it right? 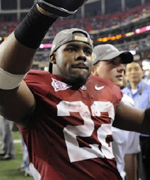 Mark Ingram of Alabama won the Heisman Trophy over the weekend, becoming the first player from the Crimson Tide to take home the award. He won in the closest vote in history, edging out Stanford RB Toby Gerhart by 28 points. Now comes the second-guessing of not only the decision but the process itself.

Against tougher competition, Gerhart gained more yards and scored more touchdowns than Ingram. So we're left wondering how the decisions were made by the voters. Was it because Alabama had a better record than Stanford? Maybe. But chances are it was the same-old East Coast bias we see over and over again in poll after poll. Take this Heisman voter's admission as just one example:

The reason that I voted for Ingram, Tebow and McCoy was because I saw them play the most. I never saw Gerhart play an entire game (we work all day Saturday and Saturday night) and only saw a few minutes of Suh's game against Texas. I refused to vote for somebody based on highlights. And I think you have to represent your part of the country; in fact, there used to be fine print on the paper ballots that instructed balloters to vote "with regard to your region." However, I think it's wrong to leave a player off your ballot completely just to help a player from your region, as apparently the case with some Big 12 voters on Tebow year. So I, too, an still unhappy about that injustice.

It's kind of a joke. Sorry, not "kind of"...It is a joke. Yet still another example of how college football is screwed up. The pollsters don't vote for West Coast teams because they choose not to watch the games, and this idiot Heisman voter doesn't know what a DVR is.

I'm not saying Gerhart should have won. That's whom I would have voted for, and Suh would have been my second-place vote. But that's me. What I'm saying is that the Heisman trophy this year is a joke because the time zone the winner played in turned out to be, for some voters, as important a factor as his performance on the field. I didn't watch the Heisman ceremony because I knew it would be the same outcome as the BCS bullshit. Oh college football, how i miss thee!