Colts pull out another one to go to 14-0

Share All sharing options for: Colts pull out another one to go to 14-0 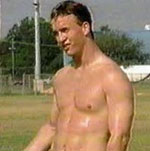 For the first time this year, I think the Colts will go 16-0. They made it 14 straight this season after a wild, 35-31 win at Jacksonville that saw nine lead changes. It was an NFL-record seventh time this season the Colts have won despite trailing in the fourth quarter, and it was their 23rd straight regular season win.

Before Thursday, getting to 14-0 had been accomplished only twice -- by the 1972 Dolphins and 2007 Patriots. The 1985 Bears, 1998 Broncos and 2005 Colts each started 13-0 before losing their first game. Game 14 seemed to be hurdle that tripped teams up, so now having jumped that, the Colts chances of finishing 16-0 seem much easier.

Their next game is home against the Jets (7-6) and they end the season in Buffalo (5-8). The Colts will be favored in both games and I defy anyone to boldly predict that either quarterback Mark Sanchez of the Jets or Ryan Fitzpatrick of the Bills will best Peyton Manning.

Indy has 10 days off to get ready for the Jets and survived Thursday with no major injuries, so I see starters playing Game 15 until the outcome is decided. If they go to 15-0, I can't see the Colts shutting it down against Buffalo if the game is in doubt; anybody healthy will play. On Thursday, for example. Manning and the offense starters played the whole game. On defense, star pass rushers Dwight Freeney and Robert Mathis played sparingly, but both were in for the entire final drive by the Jaguars that saw the Colts seal the win with an interception.

Cyd and I were talking about how Colts' drive for 16-0 doesn't feel as big as the Pats two years ago. That's partly because the Saints (13-0) are also playing for a perfect season and national interest has been split. It's also not as novel, since it was done just two seasons ago and so seems less historic. Also, the Colts are an amazingly resilient and smart team, but not dominant, so they don't have an aura of inevitability (eight of their wins have been by eight or less points). But for fans (I have seen all their games save one), they are the best entertainment in town and one that with two more wins would join some select company.

I was going through my files and came across these shots I took of Peyton Manning and Dallas Clark stretching during the January playoff game against San Diego. This is for you butt fans: 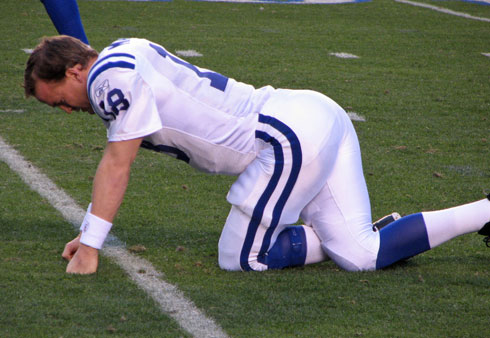 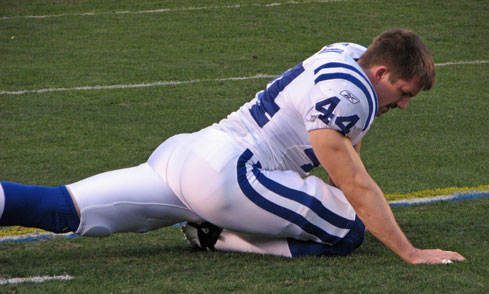