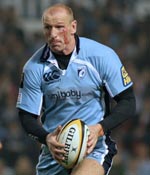 One of the many fascinating angles to this story is that he came out to his coach and some teammates years ago after ending his marriage to a woman in 2006. For several years, they've all keep quiet while they kept tackling opponents side-by-side with Thomas.

I was like a ticking bomb. I thought I could suppress it, keep it locked away in some dark corner of myself, but I couldn't. It was who I was, and I just couldn't ignore it any more. I'd been through every emotion under the sun trying to deal with this. You wake up one morning thinking: "I can handle it. Everything is fine," and the next morning you don't want anyone to see your face, because you think that if people look at you, they will know.

Thomas was shocked by how welcoming all of his friends and teammates have been.

[A coach] told two of my team-mates, Stephen Jones and Martyn Williams, and as I sat in the bar waiting for them, I was absolutely terrified, wondering what they were going to say. But they came in, patted me on the back and said: "We don't care. Why didn't you tell us before?" Two of my best mates in rugby didn't even blink an eyelid. Martyn said he never had a clue, would never have thought it. I felt everyone was protecting me and closing in tight around me. No one distanced themselves from me, not one single person.

The article is a great read; A nice way for so many of us sports fans, eager for more athletes to come out, to end the new year. Funny that our year-end podcast was about no big-name athletes coming out in 2009.

It's also interesting to see fan reaction. On a BBC discussion forum, the overwhelming majority of comments are positive and supportive of Thomas.