Toby Gerhart should win the Heisman

Share All sharing options for: Toby Gerhart should win the Heisman 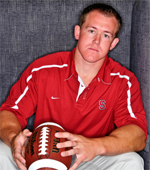 Toby Gerhart is Stanford's running back who carried a mediocre team to an 8-4 record and a bowl berth. He led the nation in touchdowns (26). He was second in rushing yards per game (144.7). He averages 200.3 yards against ranked opponents.

Now, despite being the best player in the nation this year, he has little chance of winning the award he most deserves: The Heisman Trophy. Why? Stanford approached Gerhart about mounting a Heisman campaign several months ago. Gerhart refused. Yep, while guys named Tebow and McCoy happily use the media to proselytize their faith or their own name, a top-level college football athlete refused a hype machine. Now that's special.

"It seems like 50 percent of the Heisman is preseason hype," said Stanford coach Jim Harbaugh. "Twenty-five percent is playing for an undefeated team. And 25 percent is what they actually do."

Will the voters see through the hype and the preseason talk? I doubt it. Look who's at the top of all the AP and Coaches polls. Because Florida, Alabama and Texas were deemed more worthy in August than TCU, Cincinnati and Boise State, they'll be playing for the national championship.

Yes I'm a little biased here, but it's for more than the fact that I went to Stanford. The kid played out of his mind. He didn't play on a team that was supposed to contend for a bowl game, let alone a national championship. Some (including Sports Illustrated) are wondering out loud if he'll get ignored because he's not black. When you think about his prospects of winning the trophy, you have to consider his race or preseason predictions as deciding factors, because there's no legitimate reason for him to not win it.

Yet because of him, his team succeeded. He had to carry more than anyone else in the nation (literally and figuratively). For that, he deserves the award.

Since the only way to win the award is to have your name hyped long before the season, let me start on the Andrew Luck campaign right now.