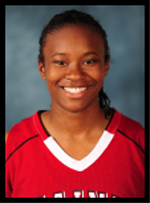 St. Joseph's women's basketball player Lauren Robinson has come out publicly in a wonderful article in The Hawk, the student newspaper at St. Joe's. Robinson talks candidly about being gay and Catholic at a Catholic university.

It's hard to go to Mass and sit there sometimes and listen to people talk about the founding principles of Catholicism and talk about homosexuality. But also talk about diversity and trying to be inclusive. At the same time [they] continue to use the Bible and say that you're still sinning. For me it's been more of a personal thing in terms of accepting how I feel about God, and realizing that God loves everybody if He made everyone.

She also has a strong reaction to the steretype that all female athletes must be gay.

It's a bunch of bullshit, that's what it is. I mean, for lack of a better term. There are really not that many gay people on basketball teams. I'd like to say that it's because of the stereotypes we have about what's masculine, what's feminine. There are girls who are really big and really strong. That's just part of the life that we live. When you play on a basketball team it's because you're good at that sport. How sexuality comes into play, I don't even know.

Sounds like a smart, strong woman. Here's hoping her team has a great season. They've started 2-4, so it's not looking good.