Brent, who has taken photos for Outsports for years, was at UCLA Friday to shoot the Rafer Johnson / Jackie Joyner-Kersee Invitational track meet. On the way back to his car he came across some UCLA lacrosse players and found out they were playing a game Saturday against Claremont, located in eastern L.A. County. Taking a break from track the next day, he watched some of the first half and then halftime and was shocked by what he heard:

They got their halftime chalk talk, and did their rev-up "Go Team" yell, followed by a couple of "Let's go kill those faggots!" and "Let's go get those f***ing faggots!" which just stunned me. And as they were walking back to their sideline, one player said to another, "besides ... they've got blacks too."

It's hard to know how prevalent it is on the team, or if the majority wouldn't agree but are afraid to say anything lest it seem like they too are somehow a faggot. Either way, no player or coach -- all within easy earshot -- countered it. This reminded me of what often goes on whenever you look around and see that no one of the potentially offended group -- women, minorities, gays etc. -- are in earshot and you can spout your bigotry not only fearlessly, but as a sign of your superior status and machismo.

It was the particular tight sequence that really got to me -- the two "faggot" comments yelled in a row, and immediately following as they head back, the "they've got blacks" aside from one player to the other. I'm sure that UCLA would view an intramural situation like that to be pretty bad, but when they're wearing UCLA uniforms [lacrosse is a club sport], you would think they'd have some responsibility.

Brent was not sure if the two "faggot" comments were uttered by one or two players. He e-mailed one of the players he met (who did not make any disparaging remarks) and asked about the comments Brent heard and got this response:

I'm not extremely surprised to hear words like faggot during the game. It's not a pretty thing, but the young kids will sometimes use those words in the heat of the game. Our coach began making us doing push ups for all profanities uttered during practice, in order to increase our self control. By the time the players become juniors and seniors, that stuff is mostly done with.

Brent asked some follow-up questions, but the player never responded.

In publishing Outsports, it has seemed to me that progress of the acceptance of gays in sports has come in the mode of two steps forward, three-quarters step back" and it's incidents like this that always cause a shake of the head at how much progress still has to be made. I know that such utterances are commonplace in sports, but think people need to be called out when they make them.

The homophobia and racism displayed by players living in the one of the most diverse cities on the planet and attending a diverse campus is disgusting and saddening. It is also ironic that these comments were made on the same campus that was holding a track meet named after Rafer Johnson and Jackie Joyner-Kersee, two of the most groundbreaking black athletes in history. I am not sure why I thought lacrosse might be more enlightened, but it is always telling how people talk when they think no one is listening.

Update: From a comment below, that puts the team in a bit more context:

"FYI, the Lacross team is NOT sponsored by UCLA Athletics so your contact information is incorrect. It is a club sport that is managed by Cultural & Recreational Affairs.

"It doesn't excuse the homophobia but I just want to make a point that this isn't an UCLA Athletics team and there isn't anything UCLA Athletics could do." 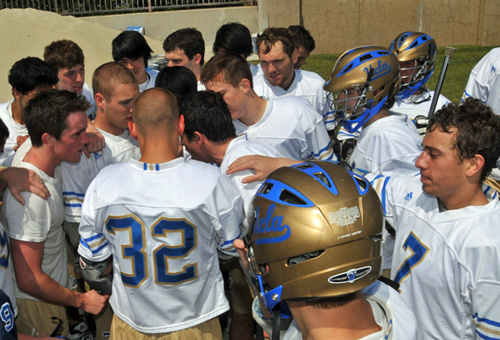 The UCLA lacrosse team at halftime vs. Claremont.