Ryan Succop, (pronounced "suck-up") a kicker from the University of South Carolina, is this year's Mr. Irrelevant, named after the final player taken in the NFL Draft. Succop, drafted by the Kansas City Chiefs, was the 256th player taken. At 6-3 and 224 pounds, he's also got a muscular body not normally associated with kickers (see photo below). Succop was scoped out by Outsports readers on our Hunks of College Football forum.

As Mr. Irrelevant, Succop will be honored in Newport Beach, Calif., with an opening reception on June 23. The All-Star Lowsman Trophy Banquet and Rams reunion will be held at the Newport Beach Marriott Hotel on June 25. Succop will wrap up Irrelevant week with a Main Street welcome and closing ceremonies in Huntington Beach (Surf City, U.S.A.) on June 27.

Some Mr. Irrelevant's wind up sticking with their teams. Last year's Chiefs' kickers were pedestrian, so Succop will have a shot if he performs well, though in 2008 he hit only 20 of 30 field goals. Now, on to the beefcake: 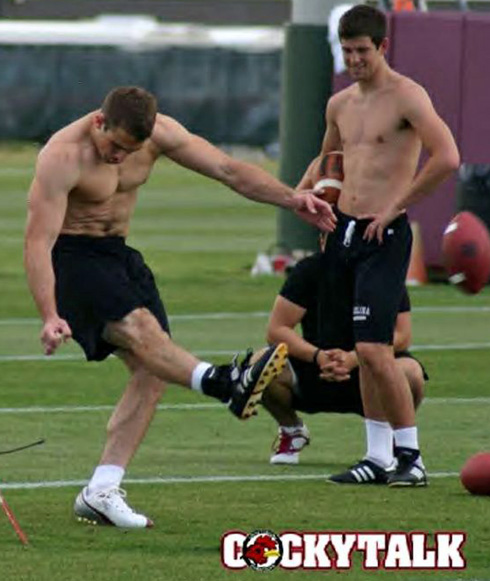