Football being used to sell Sleaze

Share All sharing options for: Football being used to sell Sleaze

Apparently, there's an annual event in Sydney, Australia, called the Sleaze Ball. And apparently, this year's promotional campaign will use sports to draw in revelers. And also apparently, the photographers behind the photo shoot don't know a football from a football. Look, the pics are pretty sexy for sure. But couldn't they offer some semblance of authenticity to the photos? I mean, how often do soccer players punch each other in the gut? Run while carrying the ball in their hands? Just by tossing a football or soccer ball into a photo doesn't make it "athletic": It screams, "Hey guuuuurl, look at us, aren't we butch?"

Their American football pic, complete with mud smeared on the models, is after the jump. 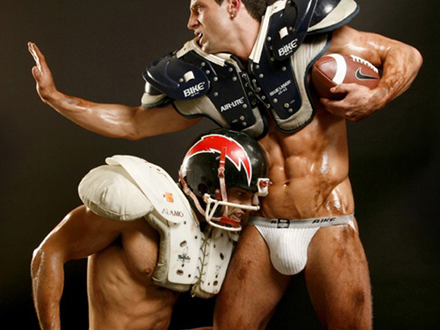