Share All sharing options for: Poll: Many college players have gay teammates 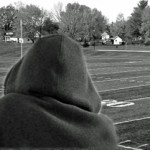 In the upcoming college football issue for ESPN the Magazine, there is a poll of 85 current players. Among the tidbits was this:

Do you have any gay teammates?

Half is a big number and 70% is pretty stunning given how often we're told that being gay in a sport like football is impossible. What the poll question does not answer, though, is whether those surveyed personally know a gay teammate or whether there are players on their team they suspect are gay. It also does not answer whether these respondents perceive having a gay teammate as a positive or negative thing. Finally, 85 is a small sample and we don't know if it was weighted to be representative.

We profiled anonymously a college football kicker who is known as gay by his team. He has had nothing but support. Times are changing, especially for young people who are growing up either knowing gay people or seeing them constantly in the media. When we'll get a publicly gay player, though, is still anyone's guess.