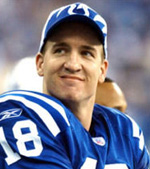 Anyone else find it interesting that star players are taking so many preseason snaps? Weeks 2 and 3 in the preseason have been in recent years used to sit the stars and see what the backups have in the tank. But last night Peyton Manning led three series and attempted 14 passes. Donovan McNabb also took three series. Even LaDainian Tomlinson, who hadn't played in a preseason game since 2005, ran the ball several times in their first game.